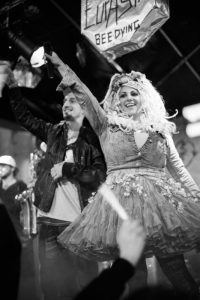 In 2008 Beatsafari decided to go on a music safari and so they put fresh music and positive vibes in their luggage – ready to explore the country! Ten years later we are pleased to announce them on Hanfparade!

Beatsafari, that is, Lisa, half italian half german moved from milan to berlin 11 years ago to study stage costume design but soon found the true destiny when I met the producer DJ Locut and his partyband back in 2008. Lucky me she found my second family, their boys!

The sound is made unique by the beats of Dj Locut, the drums of martin, the deep chilenian bass of Patito, the hornsection of Adrian, Micha and Jörg and the latino guitar of Javier! Wherever there´s sunshine – we rest: No matter if reggae, dancehall, pop, hip hop, rock or electro – There are no frontier zones! Our music is as colourful as the flowers in my hair!